The Botula's: A Family Portrait! 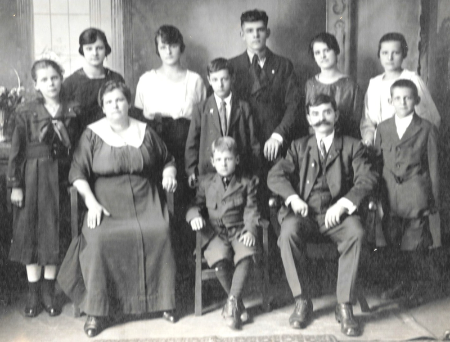 Johana and Karel Botula and Family in the1920s

In my family there is a wide interest in all things Botula. All my life, I've been listening to my grandparents, aunts and uncles, cousins and other relatives and family friends tell stories of The Olden Days, or The Old Country, and, well, you get the idea. When Alex Haley's history of his family became a book, then a movie for television and eventually a worldwide media sensation, the phenomenon opened the floodgates for millions of amateur genealogists and budding historians.

The Botula story is a Bohemian Roots!   When my grandparents immigrated to the United States in 1903, the country they came from was the part of the Austro-Hungarian Empire now known as the Czech Republic. So, over the years we have had lively family discussions over whether or not the Botulas were Bohemian, Moravian, Silesian or Slovak.  It’s not unusual for someone that I am meeting for the first time to ask me if I am Italian. The melting pot has worked its magic on me. I tend to feel at home wherever I am.

Karel and Johana Botula came to the US in 1903. Karel's port of entry was Philadelphia, just ahead of the rest of the family. He set out for western Pennsylvania to mine coal for the Ellsworth Mining Company in a grimy little mining camp called Cokeburg, just south of Pittsburgh. Johana and the children, Max, Karola and Frances came in through Ellis Island in New York Harbor. The family quickly grew to eleven, the parents and nine children. (one child died a at birth). By the 1920 US Census, the family had grown and moved to Pittsburgh, where Karel traded in his pick and shovel for a job with Carnation Dairy. My father, Karel Jr. or Charles, Jr., as he later anglicized his first name, was the first in the family to go to college.

Among the family photographs and other documents that I have acquired over the years is a sociology paper written by my father in the 1930s.  The story that follows gives a brief account of the Botula family, told largely in my father’s own words from his college paper. It covers the period from the time the family immigrated in 1903 up to my father’s college years. (He graduate from the University of Pittsburgh in 1934).

The story is an Adobe PDF file, so it may take a few seconds to open. You may also enjoy viewing it in the full-screen mode. Just click the icon on the upper right corner of the PDF frame.  Na zdraví!

The Geneology of Karel and Johana Botula

A Nation of Immigrants!

My family is among the millions of immigrants who came to these shores over the years seeking to build a better life. And, history and human nature combine to blur the memories of the parts of the world where they originated. As each wave of newcomers arrives on these shores and becomes assimilated, memories of their origins fade and eventually become lost. In the case of my grandparents – Karel and Johana Botula, they  and the generation represented by all nine of their surviving children – all of my aunts and uncles – have passed from the scene. The second generation, all of my cousins, have grown older and are beginning to pass away. The family has grown and prospered since Karel and Johana arrived in the United States in 1903, along with the first three of their children and Karel’s brother Paul Botula. Behind them, the Austro-Hungarian Empire they were born into had crumbled and Europe was devastated by two world wars and divided by an oppressive cold war that followed. It has fallen to a new generation of Botulas to retrace the steps that led us to the present time in order to understand our origins and the contributions we are making to our adopted homeland.

In 1991, such an endeavor was undertaken by Keith Nelson, the grandson of Karel and Johana’s younger daughter Mary Botula Wibner, one of the American-born first generation of the Botula clan. Keith took advantage of an opportunity he had to attend Charles University in Prague, Czech Republic for the spring semester. Founded in 1348 by King Charles IV, it is the fifth oldest university in the world. At the end of the semester he visited several archives in the vicinity of Ostrava, in the eastern part of the Czech Republic near the border with Poland. After consulting with several of his professors at Charles University about the family history, Keith Nelson set out on his research mission. He had been told that the Botulas were from Silesia, and that he would have to first visit the Silesian archives in the town of Opava, near the Czech-Polish border. The story is told in his own words with excerpts from a letter to family members that he wrote on his return from Europe:

Karel Botula was born in 1874 on February 9th in Silesian Ostrava in the village called Zamosti. He was an evangelic and was born into a mining family.  Ostrava is a mining center in Czechoslovakia about 100 kilometers from the Polish border. Karel Botula’s father Paul Botula 2nd, was born 19th June, 1838 in the town of Niebory. They worked in the mines and mills of the largest mining colony in Ostrava; Vitkovice (vit-ko-vee-tseh).  Paul's first wife was Anna Cichy (tsee-key) born 19th September, 1838 in Komorni Lhotka.  They were married on August 16th, 1863.  Her parents were George Cichy [farmer in Komorni Lhotka-no birth or death dates] and a woman whose first name only was listed- Marianna. Paul's second wife was Magdalena Barabosz (born January 20th, 1854 in the village of Postredny Sucha and whose father was Paul Barabosz-that is all we know about the both of them).  Paul Botula 2nd had a father named Paul as well.      Paul Botula l, born in 1779, and died in 1839 at age 50. Paul Botula I was also a farmer, born in Niebory.  His first wife was Suzanna Merta (herself a widower from a previous marriage to Josef Merta) and they were married on the 18th of May, 1817.  Paul then married Maryna Mucha (born 1802) whose father was a farmer named Andreas Mucha, who also lived in Niebory.

[An  interesting side note: Paul Botula  changed the name from Bottula with two t's to Botula with only one  t sometime in the early 1800's for reasons unknown.] Unfortunately, these are all the records we have on the Botula side of the family due to their religious affiliation at the time. The Catholic records are much more complete than the Evangelical records of this time. Here as well we have somewhat of a mystery: the Botula family changed the official status of their religion twice in the records with the final change taking place when Paul I married Maryna Mucha who was previously an Evangelic. We can only assume that this change was due to love.

The Tofel side of the family history is more extensively recorded. Karel Botula and Johanna Tofel were wed in Moravian Ostrava on August 8, 1897. Johanna's father was Franz Tofel, (born August 10, 1849 in the village Merkovice) He was a miner in Palkovice. Franz' parents were Tomas Tofel (born March 2, 1815 in Merkovice, died January 17, 1883), and Anna Konvichkova (no birth or death dates).

They (Tomas and Anna) were married in Koslovice and lived there until their deaths.  It is noted that Franz Tofel was crushed by a stone in a mining accident. Tomas Tofel's father was Josef Tafel who lived in Merkovice (no birth or death dates) and his mother was Anna Hrncharova from Myslik. Anna's mother was Fabian Hrnchar, a farmer as well from Myslik.  Tomas Tafel's wife was Anna Konvichkova of Koslovice and they were wed on June 3, 1848. Anna1s father was a farmer from Myslik named George Konvichka and her mother was Marianna Cervenkova.  Marianna's father was George Cervenka, a farmer from Koslovice. The name Cervenka probably  derives  from the Czech word for "red". No dates are recorded from any of these, they were all found through back-referencing.

And this is where my successes came to an end.  There is presumably more information in the archives of the Evangelic church in what is now, and has been since after WW2, present day Poland. As far as  I can tell, the  parents and grandparents of the last ancestors listed with dates, must stretch back to the early or mid-1700's.  Almost all of these family members were farmers, an honest tradition that carries on to this day throughout most of the Czech countryside.    The Czech people on the whole are quiet, unassuming, strong,  honest people who have western values and who have unfortunately been tripped up by some particularly nasty occupiers in the last century.        Unlike many in Eastern Europe, they are going about the transformation of their society in a peaceful, cautious, and thoughtful way that will serve them well in    the future.   Their  traditions of scholarship, ingenuity, and craftsmanship include them in many of the great accomplishments of their Germanic neighbors  and  the  entire realm of old-world Europe.

[I would like to thank Keith Nelson and his mother, my cousin Anna Marie Wibner Nelson for providing this research material to my own Botula Family History Project for www.mikebotula.com]