Whose Bright Idea Was This, Anyway?

The more I researched The LST 920 Project, I kept asking myself the question, Whose bright idea was it to set out deliberately to build this Long, Slow Target (or LARGE, Slow Target, depending on the particular viewpoint) anyway? Good question, MikeBo! And, I think we give Winston Churchill the credit. (Feel better, dad? You always admired Churchill!)

First of all, let me explain just what the hell it is that I’m talking about. LST is an acronym for Landing Ship, Tank. During World War II, the oceans of the world were teeming with them. More than eleven hundred LSTs were built, almost overnight in any domestic body of water that was deep enough and wide enough and protected enough to install a shipyard. There were shipyards cranking out LSTs and other landing ships on the Pacific Coast and the Atlantic and Gulf Coasts and every American river wide enough to float one of the things. The LST 920, which my father served on as executive officer was built at Hingham, Massachusetts by the Bethlehem Steel Company. Today, if you look at a Google Earth satellite photo of Hingham, the shipyard is gone. But, during the War, the place was teeming.

So, what was an LST? Good question. Because if it weren’t for the genius who came up with the idea to build it, everybody from Norfolk, Virginia to Chicago would be  sprechen sie Deutsch and everyone else from San Francisco east to St. Louis would be speaking Japanese, while the border with Mexico would move northward to about Oklahoma City. The US of A would be no more. We would have been rent asunder - citizens of the Empire of Japan or denizens of Die Vaterland, including even the patriots of Idaho. Kapisch?

The LST wasn’t the only the landing ship in the Allied invasion fleets. No sir! There were LSMs, LCIs, LCTs, LCVPs (popularly known as Higgins Boats), LCAs, and DUKWs (The Ducks). All sorts of sea going critters designed to crawl out of the sea onto land like an amphibious sea turtles depositing their cargos of troops, tanks, trucks, jeeps, rations, fuel, ammunition and anything else needed by the invading forces. The LST, though, was the Big Daddy of all the landing ships. To get an idea of how she worked, start by sawing off a 328 foot length of New York’s Queens-Midtown Tunnel, outfitting it with a ramp in the front and a giant winch with a huge anchor at the stern. Then fill it up with all of the Sherman tanks, trucks and jeeps, munitions, gasoline you can round up along with a few tons of other stuff and finally load it up with about 200 fully armed marines or soldiers with all their luggage. It was a bit crowded. Not much room for the passengers to pal around with the 110 or so officers and men who make up the LSTs’ crew. Oh, and make sure that the top deck carries a load as well as the load down on the tank deck.

The whole idea of the LST was to have an invasion ship that could be packed to the gunwales (Gunnels to you, landlubber!) with people, vehicles and all their supplies along with enough high explosives and gasoline to be seen from San Pedro to Guam if it blew up. Point being - In 1942 OSHA hadn’t been invented, yet. Most of the time these babies roamed, the smoking lamp was OFF. The incentive to build them is traceable to the Battle of Dunkirk in 1940. The German Blitzkrieg invasion of Poland in September 1939, which triggered the Second World War, was followed by months of Sitzkrieg or Phony War until May 10, 1940, when Blitzkrieg broke out again. The French, who had sat smugly behind their Maginot Line, were swarmed when Hitler’s Wehrmacht made an end run around their dinosaur defense, through Belgium and stampeded toward Paris. The British, which had landed a whole army in France to support their allies the French, battled the advancing Germans all the way back to the Channel Coast at Dunkirk. Once there, the Brits appeared doomed until London rounded up every boat in the United Kingdom that could float and sent them across the English Channel to rescue British forces stranded there. But, heroic a deed as this was, the British were forced to leave all their stuff behind. Now, an army without its stuff is nothing more than a crowd of people with nowhere to go.

Enter Winston - We Shall Fight Them on the Beaches - Churchill! During the First World War, Churchill as First Sea Lord of the Admiralty was instrumental in launching the Dardanelles Campaign against the Turks. The Gallipoli Campaign, as it is also known, was a disaster for the Allies, and it sent Churchill into political obscurity for several decades until his comeback as Great Britain’s legendary wartime Prime Minister in World War II. In Churchill’s belief, the Gallipoli disaster could have been averted and the Allies better served if they had the resources to transport men and materiél on to and off of the invasion beaches more quickly, efficiently and in greater volume than what they had in 1915. Hence, during his exile from power, the Former Naval Person let the problem percolate through his substantial mind. Eventually, his idea would become that 328 foot section of the Queens-Midtown Tunnel that I mentioned earlier.

According to a variety of historical sources, Churchill made a formal request of President Roosevelt about designing a naval vessel that could be used as part of an Allied invasion fleet. The first design was submitted in 1941 and by the following year the very first Landing Ship Tank, was launched in early 1942. By the end of the war more than 1,000 of them would join the US and allied war fleets.

These ships were built in about twenty different shipyards on both coasts and even in the American Heartland.  LSTs were built in places like Seneca, Illinois, Evansville and Jeffersonville, Indiana and Pittsburgh and Ambridge, Pennsylvania. About 670 LSTs were constructed inland. Other LSTs were built in existing Navy yards. In fact, Boxer the first LST, was built on an already laid aircraft carrier keel at Newport News Shipbuilding and Dry-dock Corporation, such was its importance to the allied cause.

As the original design of the LST was refined, a mock-up of it was built at Fort Knox, Kentucky. The features built into this land-locked prototype eventually found their way into every LST built during World War II. And as The Arsenal of Democracy fine-tuned its industrial techniques, the required time for building an LST shrank from over four months to less than two. On my dad’s ship, which was built at the Bethlehem-Hingham Shipyard in Hingham, Massachusetts, the keel was laid down on 26 April 1944,

As another example of the Swiss-watch-mechanism of the American war machine: While the manufacturers, including legions of female war workers were cobbling together the Allies’ victory fleets, the U.S. Navy was applying its own Detroit-style assembly line techniques to the training of its crews. My father’s crew of the LST 920 began its LST training at Camp Bradford, Virginia in January 1944 even before their ship started to take shape up the coast in Hingham. The crew was largely made of young men from the coal country of western Pennsylvania and West Virginia who idea of water was a local river or lake or pond, not the ocean. In fact, only three of the LST 920s crew had ever been to sea – Harry Schultz, the Captain and two crewmen. The ship’s keel wasn’t laid down until April. At least training was completed in time for the launching on May 29, 1944. Commissioning took place on June 17, 1944. Dad invited my mom and me to come to Boston for the commissioning. That was the last time I remember seeing my dad until he came home in December 1945.

I’m including a link to the Navsource website so you can look over Uncle Sam’s basic fact sheet on the LST 920, which was typical of the 1942 vintage 542 Class Tank Landing Ship. The United States built more than eleven-hundred of them. One of them is still chugging along. The LST 325, which took part in the June 4, 1944 D-Day Invasion of Normandy, is now a floating museum ship and World War II memorial with its home port in Evansville, Indiana. The LST 325 welcomes visitors and takes passengers along on its periodic cruises. So, if you want to get an idea of what life was like for grandpa aboard his LST, check it out. Another great source of information on LSTs is the United States LST Association. The US LST Association publishes The Scuttlebutt, a terrific magazine about these ships and the people who shipped aboard them. There are other online resources. Just Google LST. My on-line story of Charlie B and His LST is a work in progress, so, feel free to check back here from time to time, because I will be adding more stories as time passes.

In conclusion, let me share one of my favorite Winston Churchill quotes with you. On the eve of the D-Day invasion of Normandy turned to Allied Supreme Commander Dwight Eisenhower and said, “The destinies of two great empires seem to be tied up in some god-damned things called LSTs! Enough said. 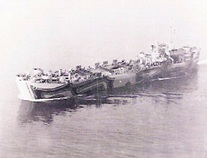 Fortunately for us History buffs, there are many sources of information and pictures behind the stories that appear on MikeBotula.com. Here are some of the specialty links that will provide some additional depth for the history aficionado.