The sad news reached me, as it so often does these days-by email:  ‘’My name is Robert Charles Watson-1944Brockmann and I have been a neighbor of Chuck Watson for over thirty years. I am saddened to report that Chuck passed  away today at his home in Tumwater, Washington.” Thus, another long life of a member of what Newsman Tom Brokaw called “The Greatest Generation” came to an end. Charlie, as I dubbed when I referred to him as “The Unsinkable Charlie Watson” in my book “LST 920: Charlie Botula’s Long, Slow, Target” (AMAZON BOOKS), was the ship’s cook aboard the LST 921, when it was torpedoed by the U 667 in the Dover Channel en route to Falmouth, England in August 1944.

The LST 921 was my father’s sister ship. Its crew had trained with the crew of LST 920, the two ships had been built scant days apart. Under weigh, they were alike as the proverbial  two peas in the pod. Charlie had been trapped under a tangle of shelves in the narrow companionway of the LST 921, when he was rescued by two “black gang sailors”  who had just made their own dramatic escape from the flooding engine room of the 921. After my second edition of my book published in 2016, Watson called me from his home in Tumwater, Washington.

Charlie Watson called me to say Hello! He sounds pretty hale and hearty for an Old Salt of 95! Ninety-five! Not unusual these days, what with all the improvements in lifestyle and medicine. The fact is that Watson’s life could very well have ended at age 23 on a sunny August afternoon in 1944, when his ship was torpedoed in the Dover Channel between Milford Haven, Wales and Falmouth, England. Now approaching completion of his first century, Charles Watson is one of the few living survivors of a German submarine attack on an Allied convoy off the coast of England two months after the D-Day Allied landings at Normandy. His ship, the LST 921 was torpedoed along with the British escort ship LCI(L)99. Survivors were rescued by crewmen from my father’s ship, the LST 920.

Watson’s ordeal is described in my book, LST 920: Charlie Botula’s Long, Slow Target (Amazon Books) about my father’s adventures in the US Navy during World War 2. In an eyewitness account by LST 921 crew member Lloyd Meeker and John Abrams who survived the attack in their own harrowing escape from the ship’s flooded engine room, recounted in separate statements to me; LST 920 took us to Falmouth, England to a Navy hospital. There were lots of cuts and broken bones, Meeker and Abrams recalled. The cook (Charlie Watson) was injured the most. Meeker recalled, the last time I saw him, he had both legs and an arm in casts. He was in traction and his jaw was wired shut. Meeker also recalled, we were told that 43 survivors and one body were taken off the LST 920. All of the rest of the men went down with the stern section!

After being told about my book by his neighbor, Curt Pederson, Watson was calling me to thank Chuck in recent photome for writing about the experience and to fill me in on what happened to him after his rescue. Fully half of the LST 921’s crew was lost in the attack by the German U 667. Watson was one of the lucky survivors rescued by my dad’s ship, the LST 920. I was trapped below deck. Both my legs and one arm were broken. I was trying to crawl out when Meeker grabbed me and got me topside, Watson told me. Meeker got me into the water so I could be pulled onto a raft with some other guys from the ship. Then Watson told me a story that I’m sure he has told countless times since the torpedoing of his ship. All of a sudden, I could see a torpedo trail bubbling through the water, coming straight at me. All I could do was stare at it!  What happened next, I asked him? Damned torpedo zipped by right below me. It didn’t hit anything though. I told him about my father standing on the bridge of his ship earlier watching as a torpedo came straight amidships at the LST 920. At the last split-second, the British escort ship came alongside and took the U 667’s torpedo full force and was blown out of the water. What I didn’t know until Watson told me his story, was that my dad’s ship escaped being torpedoed a second time. As Watson was being hoisted aboard the 920, the Captain, Harry Schultz ordered a sharp turn as an evasive maneuver. Another torpedo, fired by the U 667, passed close by, but missed the ship.

Watson was hospitalized ashore after the LST 920 reached Falmouth. He told me, the doctors put him in a full body cast with both legs encased in plaster and wired his jaw shut. Doctors tried to save his badly injured leg, but eventually a Navy surgeon named Wyler told him the leg had turned gangrenous and would have to be amputated. The news stunned the young sailor. Do you have any questions? Dr. Wyler asked him.  A lot of guys in your predicament want to know if I have the skills to amputate your leg. Watson acknowledged that the thought had crossed his mind. Do you follow baseball?  Asked the surgeon. Yessir! Watson responded. Well! Said Doctor Wyler, I’m the doctor who operated on Dizzy Dean’s elbow. Dean, was  a baseball great who played for the St. Louis Cardinals and the Chicago Cubs before the war. I don’t know if Charlie realized it at the time, but Dean’s elbow injury ended his baseball stardom. But Watson’s operation saved his life.

The crew of the LST 921 was awarded a total of one hundred Purple Hearts. many of them were awarded posthumously. Charles Watson earned one of them. Ensign Don Joost, the 921’s engineering officer was awarded the Navy Cross for his heroism in rescuing many of the crew. Lieutenant Harry Schultz, the LST 920’s captain was summoned before a Naval Inquiry Board for disobeying orders when he turned his ship back to pick up survivors. After two days ashore, Schultz returned to duty and remained in the US Navy until his retirement. The U 667 struck a mine off the coast of France just a few miles from its home base, and what its crew expected to be a hero’s welcome for sinking four Allied ships on that mission. The wreckage of the submarine rests now on the bottom of the English Channel with all hands, a war grave.

Our story about “The Unsinkable Charlie Watson” will be brought full circle, now by his longtime friend and neighbor, Curt Pedersen who wrote to me in another email, “Karen  Watson just called me to tell me that her dad died of congestive heart failure Thursday evening. We were hoping he would make it to October, and we could celebrate his one-hundredth birthday! And so, another member of “The Greatest Generation” is gone and with his passing, another tenuous  bond to my own father is gone, too.

Read more
The Fall of Rome: The Forgotten Day!
Mike Botula
No comments 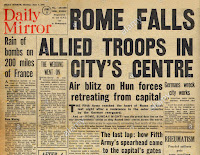 June 5, 1944: The Forgotten Day! Rome Diary Friday, June 5, 2020 Partly Cloudy 72°F/22°C in Roma, Lazio, Italia Buongiorno amici miei! “The first of the Axis capitals is now in our hands. One up and two to go!” Franklin D. Roosevelt Headline: June 5, 1944 The whole world remembers what took place on 6 June 1944! What took place the day before was eclipsed by the Allies’ invasion at Normandy. If 6 June 1944 is The Longest Day, as author Cornelius Ryan called it, the day before – il giorno prima- has become Il giorno dimenticato - The Forgotten Day! While everyone remembers General Dwight Eisenhower as the commanding general of Allied forces at Normandy, the American commander of the forces that liberated Rome has been overshadowed as well.  In leading the U.S. Fifth Army in the liberation of Rome, General Mark Clark had disobeyed his orders to cut off retreating German forces and instead marched into Rome. Ask what happened on 5 June 1944 and who was in charge and you will draw a blank. But, if you ask any Roman, or any Italian, for that matter, 5 June 1944 was the day that freedom returned to the Eternal City. In persuading FDR to launch an offensive from North Africa, British Prime Minister Winston Churchill referred repeatedly called Italy The Soft Underbelly of Europe. But, as U.S. Fifth Army Commander Mark Clark would write in his memoirs that “soft underbelly” turned into a tough, old gut!  The Allies launched their first Italian invasion, Sicily in July 1943. When they landed on the Italian mainland at Salerno in September, the Italian Army surrendered, but the hard-fought battles between Allied and German forces continued. Both the Allies and German forces suffered heavy casualties along the roads to Rome, and it took the Allies four major offensives between January and May 1944 before Rome was in their sights. After the fall of Mussolini, Italy came under the complete control of Nazi forces and any Italian resistance to German control was ruthlessly dealt with by the forces of Field Marshal Albert Kesselring. Numerous atrocities were committed by Nazi troops against Italian civilians, and it was feared by many that the Germans would destroy the historic city rather than surrender it intact.  By the time that American forces under General Clark had reached the outskirts of Rome on June 4th, 1944, Kesselring had declared it an Open City. Beginning on the fourth of June 1944, Allied troops were pouring into Rome for a victory celebration before continuing northward for the bloody battles that would lead to the liberation of all of Europe. June 5, 1944 - at the Coliseum!  Field Marshal Kesselring had earned his reputation as being a ruthless soldier, but he had displayed a sense of history, and he seemed to understand the historical importance of Rome. While June 5th, 1944 is forever etched into the memories of every Italian, General March Clark’s moment of glory was soon overwhelmed by the events of the following day when General Dwight Eisenhower gave the order and initiated the largest seaborne invasion of human history at Normandy. Ciao, MikeBo © 2020 Mike Botula [Mike Botula, the author of LST 920: Charlie Botula’s Long, Slow Target!  Is a retired broadcast journalist, government agency spokesperson and media consultant].
Read more